Do you want to go ski biking in the UK? There are many resorts that you can go to in order to enjoy a day going downhill the slopes.

But before we dwell into that, let us discuss some important information about ski-bikes.

About ski biking in the UK

Although the concept of ski-bikes was already being used for more than a century, it was only in 1949 when EnglebertBrenter patented the “sitski”. Brenter changed the metal or wooden runners into skis. This allowed ski-bikes to get off the ice track and go to where usual skiers can skid downhill – even if it is in powder snow. Since it is now more stable, it started to be viewed as a recreational sport.

As you can see, ski biking in the UK is an active recreational sport with some loyal followers and supporters. It is a fun sport to play and you can opt to go to different resorts to have a go downhill on one of these ski-bikes.

The question is, where exactly can you go? You can opt to go to a winter park or any downhill slope if you wish. Since a ski-bike is fitted with skis and you have a pair on your feet as well, you can even use it on a powder snow. You can also do freestyle jumps – as long as you know what you are doing and you have practised well.

There are different places in Europe where you can find ski-bike friendly resorts. 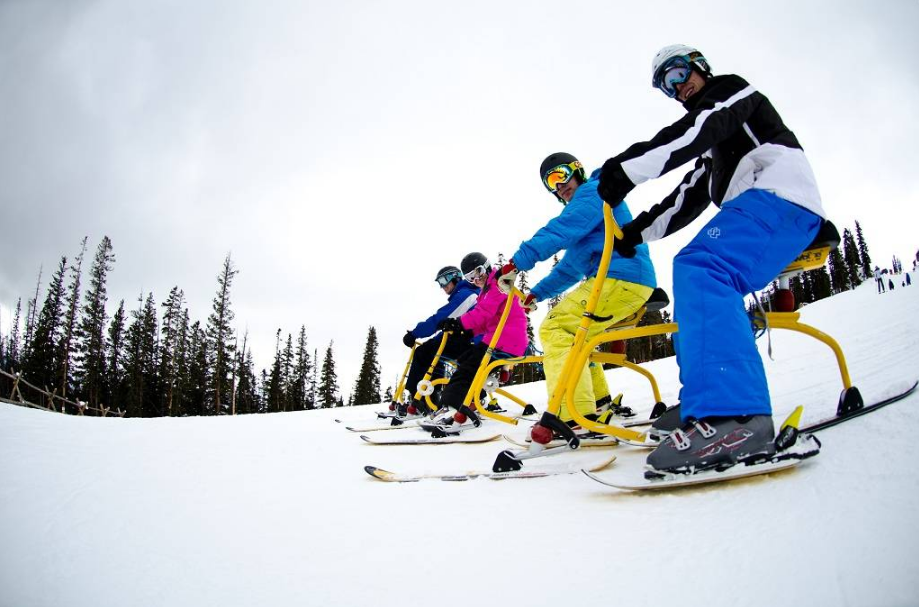 A lot of ski resorts in Austria are at below average altitude – this means poor snow conditions. To make their resorts ski-bike friendly, they have created snow making facilities. A lot of the high altitude ski resorts are open 365 days a year so this is a great place to start practising ski biking in the UK. You can head out to Ellmau, Hintertux (open all year round), and Innsbruck – among others.

Although ski-biking lost its appeal in the 1970s, it has certainly made a comeback today. The irresponsible behaviour of the earlier skibikers led to the downfall. But now, the “Le Snow Scoot” is making this sport popular once more. As long as a resort is equipped with a chairlift or cable car, you should be allowed to use your ski-bikes. Among the ski-bike friendly resorts include Auron and Isola 2000.

The unique topography of Scotland makes it a great place to go ski-biking. There are really large hills that you can enjoy. Since it is really further up North, snow falls much closer to the sea level. Among the resorts that you can go to includes Aviemore, Nevis Range, Glenshee, and The Lecht.

This is the most mountainous country in Europe so it is perfect for ski biking. It has a continental climate since it is quite far from the seas. While the summer can be very hot, the winter can also be very cold – which is great for ski-bikers. Among the resorts you can visit includes Bellwald, Davos, and Grindelwald.